To preface this month’s edition of our Monthly Electric Vehicle & Alternative Drivetrain News Roundup, new research led by the UK Met Office has found that there is a 48% chance that the Earth will exceed 1.5°C of warming above pre-industrial levels over the next four years, even if humans stopped all emissions immediately.

Research conducted by the Global Annual to Decadal Climate Update, in collaboration with the World Meteorological Organisation, also highlights that there is a 93% chance that the five-year average global temperature for 2022-2026 will be higher than the average for the last five years (2017-2021).

Global warming is intensifying at an alarmingly fast rate and the sheer scale of the task at hand should not be underestimated, particularly within sectors of the global economy that emit extremely high levels of carbon dioxide, such as the transportation industry. 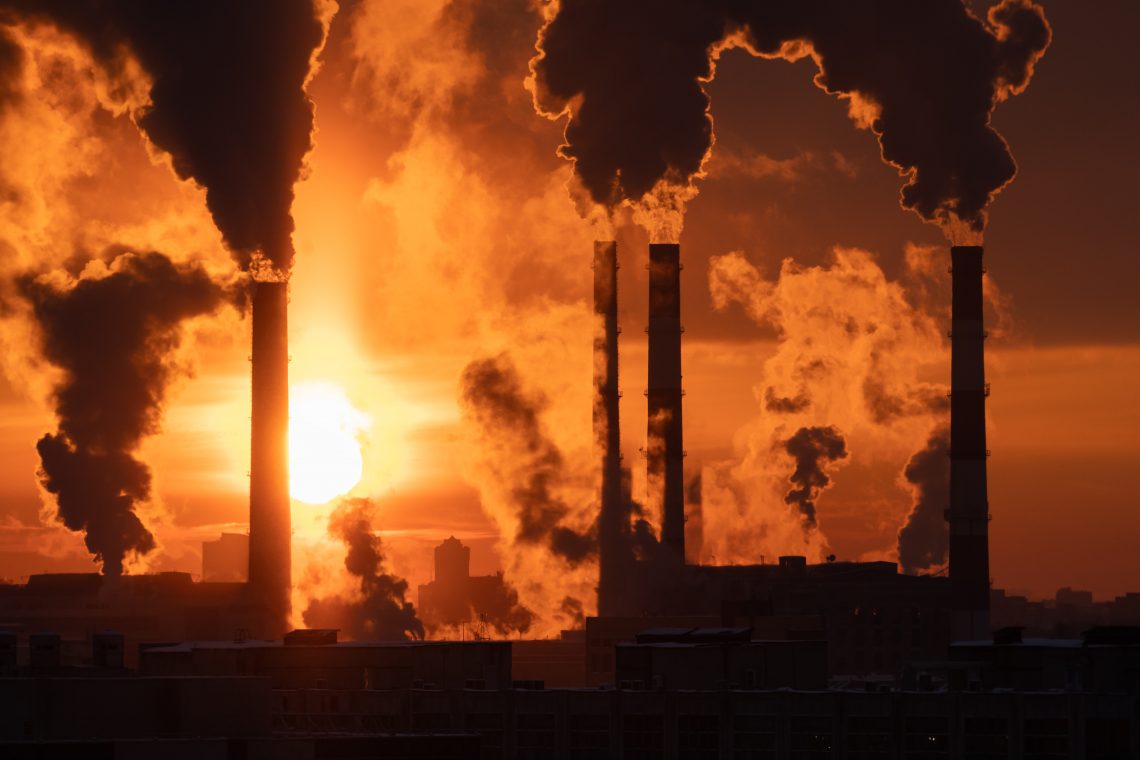 This month’s June news roundup features: the European Commission, European Automobile Manufacturers Association, Mercedes, BMW and the Office for Zero Emission Vehicles, as they take the initiative in the battle to decarbonise our roads, and accelerate Europe’s progression towards net zero.

European transport Ministers adopted a common position (also referred to as a general approach) on the Alternative Fuels Infrastructure Regulation (AFIR) as part of the EU’s Fit for 55 initiative.

The Fit for 55 initiative includes a suite of policies across various sectors, including energy and transport, which are intended to fundamentally overhaul the EU’s climate policy framework and put the EU on track to deliver on its 2030 climate target of reducing greenhouse gas emissions by 2030 (compared to 1990 levels) and achieve net zero by 2050.

The AFIR is a key piece of legislation proposed by the European Commission to ensure sufficient deployment of public charging infrastructure across member states.

These policies will play a key role in accelerating the deployment of this infrastructure and the adoption of eco-friendly alternative drivetrains.

One of the AFIR’s policies proposed by The European Commission sets mandatory targets for charging points and hydrogen refuelling stations in all 27 EU member states, based on parameters such as transit volumes on the roads and ‘socio-economic cost-benefit’ analyses.

The Council maintained a general position on these infrastructure targets for both light and heavy vehicle types.

A recent study, however, has revealed that the current mandatory targets are not sufficient enough to successfully help the EU achieve its main climate objectives.

Their findings believe that up to 6.8m public charging points would be required by 2030 to reach the proposed 55% CO2 reduction for cars – meaning that we need to see over 22 times growth in less than 10 years.

The European Automobile Manufacturers Association (ACEA) also believes that member states, the European Parliament and the Commission have to insert more ambition into these targets and their parameters.

ACEA’s Director General Eric-Mark Huitema relayed his concerns regarding the details of the AFIR:

“The Council’s position on AFIR simply does not guarantee the minimum levels of infrastructure that will be needed for vehicle manufacturers to meet their CO2 targets… Allowing member states to apply different rules on infrastructure deployment would aggravate this patchy situation.”

New data analysis from the European Automobile Manufacturers’ Association (ACEA) highlights the disparity between the concentration of charging point locations throughout the EU. 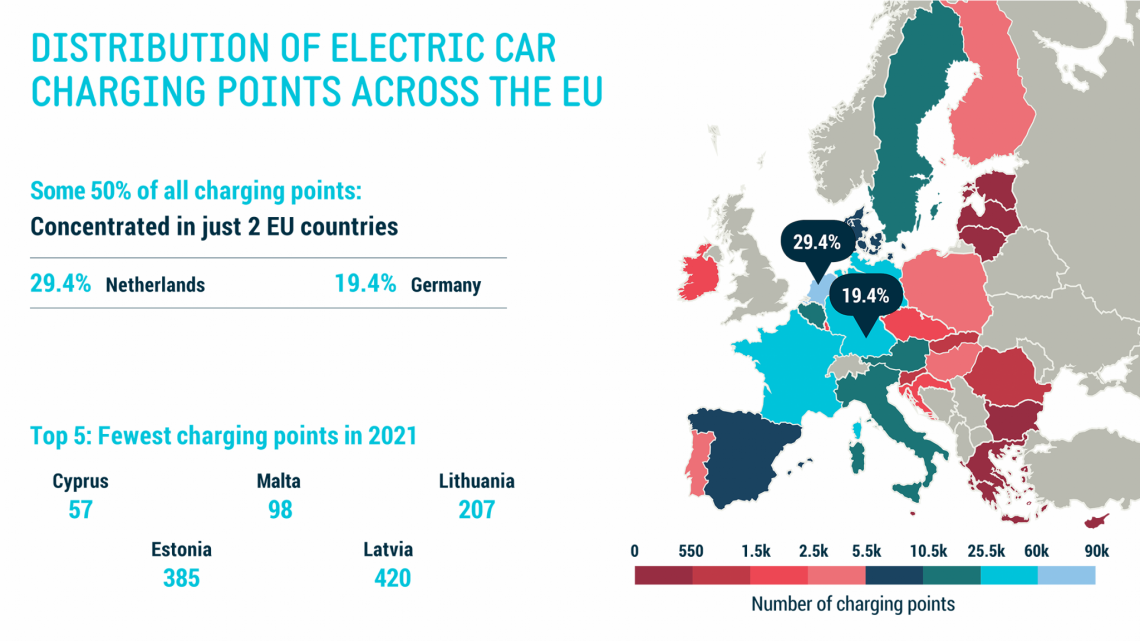 Graph by the ACEA

At the other end of the spectrum, neither Cyprus, Malta, Lithuania, Bulgaria, Estonia, Latvia, Greece, or Romania eclipse the 500-station mark combined, a disparity that the new mandatory targets in the amended AFIR aims to rectify.

The Dutch alone have as many chargers as 23 member states combined.

To put this disparity into further perspective, the Netherlands and Germany make up less than 10% of the entire EU surface area, highlighting how concentrated their charging point locality is, and the need for a wider distribution across the other member states to address this imbalance.

Greater accessibility to charging points will also encourage a broader uptake of electric vehicles in member states with the least charging infrastructure.

“While some countries are powering ahead when it comes to infrastructure rollout, the majority are lagging behind,” stated ACEA Director General, Eric-Mark Huitema. “The stark disparities demonstrate the need for strong AFIR targets that are harmonised across all EU member states.”

“We urge policy makers to reinforce AFIR so that it can achieve the aim of building up a dense European network of charging stations, spanning from north to south and east to west.” 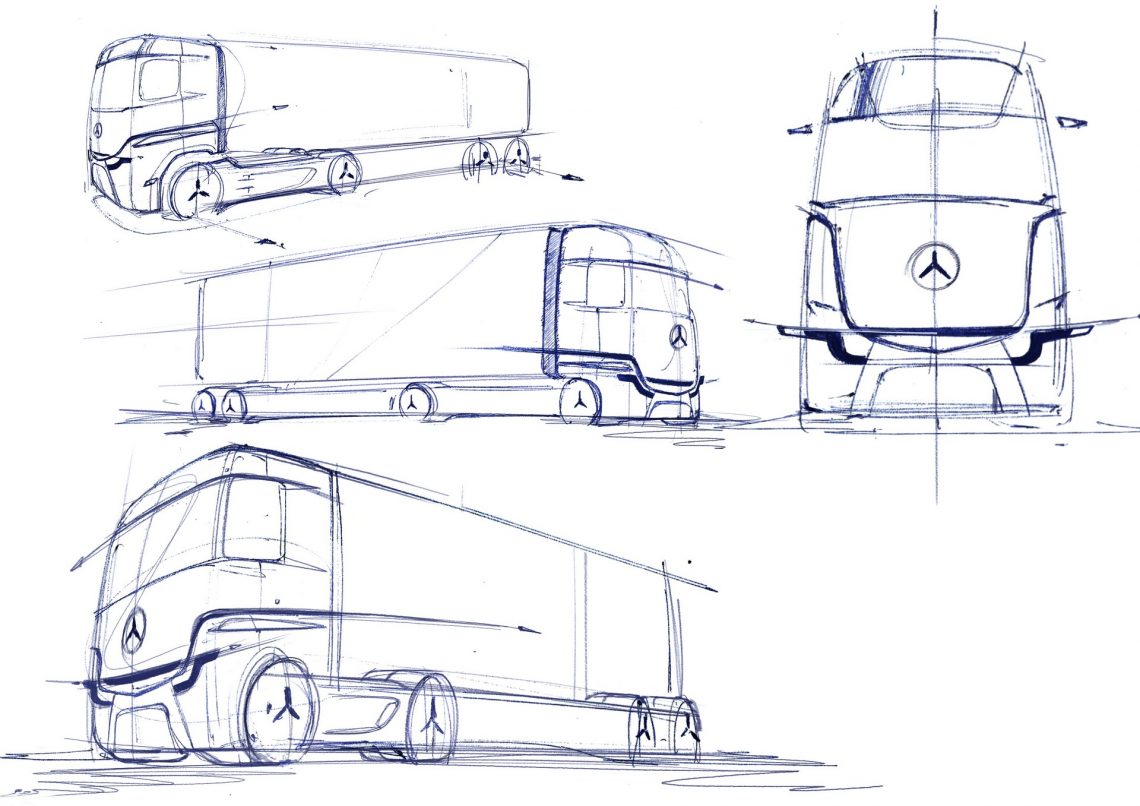 Mercedes-Benz Trucks revealed that the first prototypes for their eActros LongHaul Concept, a 40-tonne LFP battery powered lorry with a 500km range to rival the Tesla Semi, have undergone testing.

While the company is only releasing a handful of details at this point, they disclosed that the model will utilise a lithium-iron phosphate (LFP) battery, capable of 500 km (311 miles) and megawatt charging that will enable the battery pack to go from 20-80% in ‘well under 30 minutes’.

Despite the impressive specifications, Mercedes-Benz Trucks CEO Karin Rådström has reassured prospective buyers that the eActros LongHaul will have an ‘economically feasible’ price point.

The concept prototype will be unveiled at this year’s IAA Transportation (Hanover, Germany) in September, and near-production prototypes will be delivered to customers next year for real-world testing, with series production expected to begin in 2024.

BMW Group announced that it will invest roughly £865m (€1 billion) by 2030 into expanding its Steyr factory in Austria. To honour the plant’s 50th anniversary, the investment will ensure that the Steyr plant remains BMW Group’s leading drivetrain facility. The site will lead the production and development of its next-generation electric powertrains, which the brand calls their ‘e-drive systems’.

Milan Nedeljković, member of the Board of Management of BMW AG responsible for production, stated:

“This plant has developed and manufactured combustion engines for our BMW and MINI brands for more than 40 years. One out of every two BMW Group vehicles around the world today already has a ‘heart’ built in Steyr. From 2025, we will also develop and produce the next generation of e-drives here.”

BMW aims to exceed an annual production capacity of 600,000 electric powertrains at the plant each year, and have half of the site’s 4,400 employees working on alternative drivetrains by 2030.

The plant will also be carbon neutral by 2025 and sourced by 100% renewable energy (via green power and heat from regional biomass) to ensure that sustainability begins well before the customer use phase.

Steyr plant director Alexander Susanek is delighted with the news:

“With our e-drives from net carbon neutral production, we are creating the best-possible conditions for carbon-neutral mobility from 2025.”

Research conducted by the Office for Zero Emission Vehicles (OZEV) has analysed the total greenhouse gas emissions output of a variety of powertrains from cradle-to-grave, taking into account production emissions.

The findings of the study reaffirmed that electric vehicles are significantly better for the environment than their petrol counterparts over the course of their lifecycle.

The findings disclosed that electric vehicles were the most eco-friendly vehicle type, producing 97 gC02e/vkm (unit of measurement representing the carbon intensity of a vehicle over one kilometre).