To preface July’s edition of our Electric Vehicle & Alternative Drivetrain News Roundup it would be remiss of us not to allude to the realities of climate change, as we ourselves experienced first hand its tangible influence throughout the month.

Europe experienced a severe heatwave, which had real world implications for numerous countries across the continent, once again reminding us of the threat that global warming poses to life. The heatwave culminated in multiple European countries declaring national emergencies: the UK experienced record temperatures, Portugal, Spain and Greece fought to extinguish devastating wildfires, and Italy declared it’s worst national drought in decades.

These extremes are further compounded by the reality that heatwaves across Europe are increasing in intensity and frequency faster than any other part of the planet, prompting scientists to warn that there are ample reasons to believe that the accelerating global warming crisis could result in an apocalyptic disaster.

On July 19th areas of the UK recorded temperatures higher than 40°C, surpassing the previous high of 38.7°C recorded at Cambridge Botanic Gardens on 25th July 2019.

Six locations across the UK recorded temperatures above 40°C, while 28 others also broke this previous record. The severity of the heat led London to declare a ‘major incident’ due to a spate of fires across the capital. London’s fire service experienced its busiest day since the second world war as a result of the extreme temperatures, with crews attending 1,146 incidents in a single day. 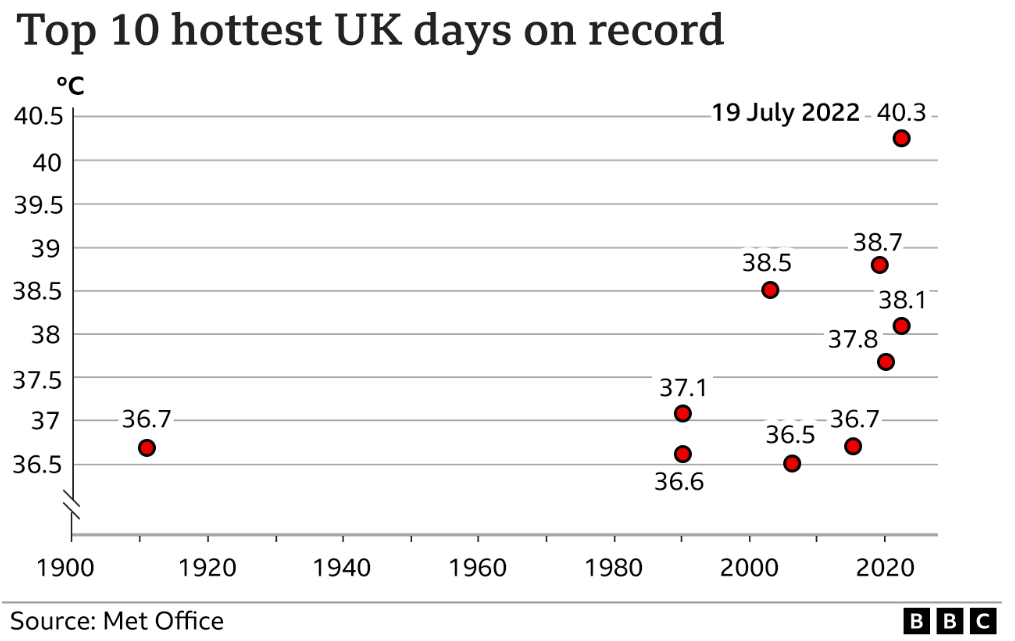 Graph by the BBC

Wildfires were prevalent throughout this record breaking summer across Europe as well. Portugal, Spain and Greece experienced wildfires that caused more than 1,000 deaths. Italy experienced its worst drought in decades, which is estimated to have affected around one-third of Italy’s agricultural product.

The implications of global warming are being felt. July’s heatwave reminds us that the climate situation is objectively getting worse, and that strict action needs to be taken across the transportation industry to mitigate its carbon footprint.

Throughout July iSeeCars, Porsche, Mercedes-Benz, New AutoMotive, and the European Manufacturers’ Association (ACEA), among others contributed to the fight against climate change through education and action.

Despite most auto manufacturers expressing concerns about EV costs, Porsche are confident that they can capitalise on the EV market and produce them to be more profitable than their petrol counterparts. Porsche predicts that eight in ten vehicles sold by the German car manufacturer will be electric by 2031. The company’s future plans and developments suggest that they have committed to an EV-centric future.

To fuel this EV-centric future, Porsche revealed that they have several new models in the works as part of their E-Performance range. The Porsche Macan, for example, which is their best selling petrol-powered vehicle is going fully electric and will replace the petrol version entirely.

Porsche also plans to develop an electric version of their iconic 911 which will be powered by solid-state batteries.

CEO Oliver Blume stated that the Porsche E-Performance lineup will continue to be expanded as they target the luxury end of the market. Blume also suggested that an all-electric luxury SUV, which will be positioned above the Cayenne, also forms part of their future plans:

“We plan to add a new luxury, all-electric SUV model to our attractive portfolio, which will roll off the production line in Leipzig. This will further expand our position in the luxury automotive segment. We are targeting the higher margin segments in particular and aim to tap into new sales opportunities in this way.”

How far can different electric vehicles go on a single charge compared to the Mercedes-Benz Vision EQXX concept car?

Research conducted by The Independent has compared the maximum range of the UK’s best selling electric vehicles. These distances were then compared to the Mercedes-Benz Vision EQXX concept car, which offers an insight into what the future may hold for the driving distances and efficiency of electric vehicles.

*All figures are the base models, with some upper range models offering up to 100 miles of extra range. 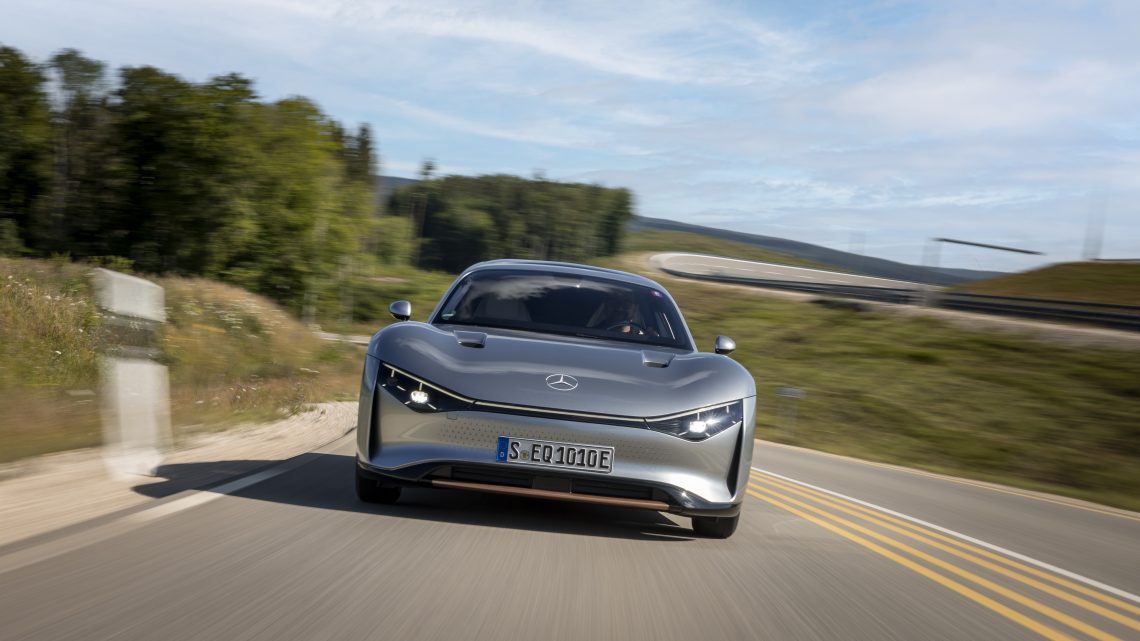 Comparatively the Vision EQXX has a driving range that is almost three times greater than the Tesla Model 3, boasting distances of around 750 miles (1200km) on a single charge. The concept car utilises a combination of advanced aerodynamics, lightweight materials and state-of-the-art battery technology to achieve these distances, however they are not not currently available for production for the foreseeable future.

Analysis by iSeeCars has found that alternative drivetrain demand is growing faster in states located in central and rural areas of the US, such as Mississippi and Utah, than it is in densely-populated coastal states like Florida and South Carolina.

iSeeCars compared over 16.3 million used car sales in 2014 to the total number of sales throughout 2021 to identify the US States with the highest and lowest growth in alternative drivetrain market share over a year period.

It offers a perspective on how alternative drivetrain uptake has progressed since 2014 and where this uptake is localised.

The table below represents the top 15 states with the highest growth rate, quantifying the States that opted for alternative drivetrains over their petrol and diesel counterparts. 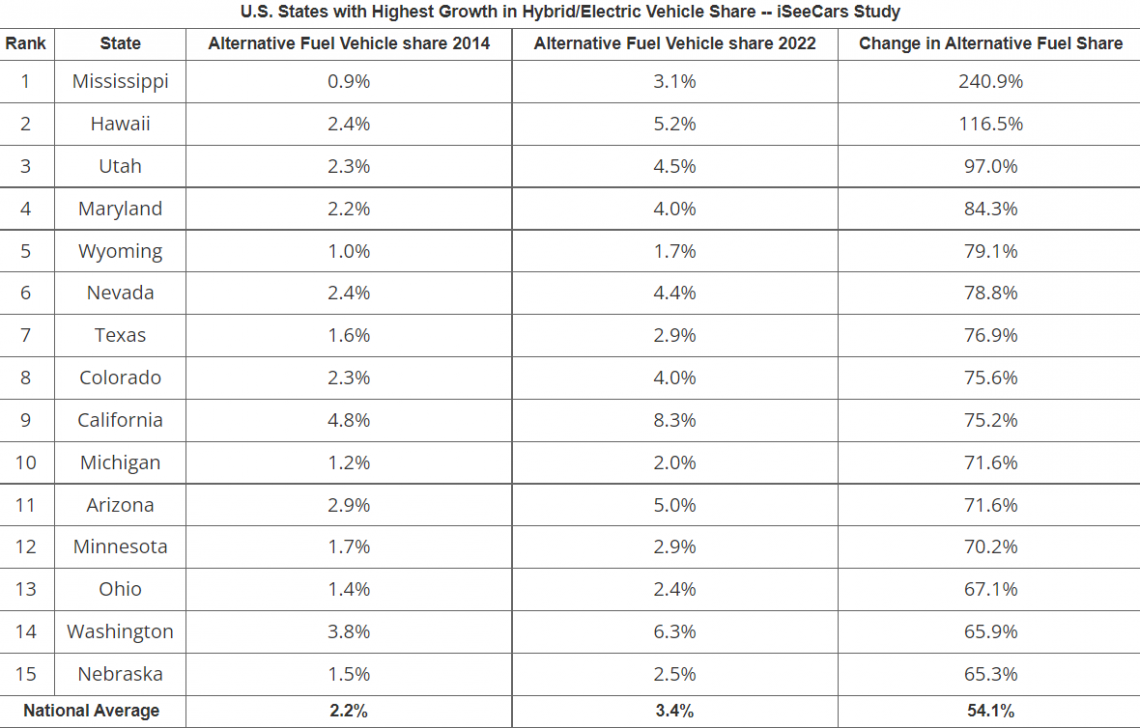 iSeeCars’ Executive Analyst Karl Brauer reflected on the surprising nature of the findings:

There are numerous factors that can be attributed to these percentage increases and decreases. Hawaii for example is a small island State with limited driving distances and higher than average fuel prices which creates an ideal environment for electric vehicles.

These statistics could also be interpreted as a reflection of an individual States policy framework and the effectiveness of their incentives.

However, States such as California (75.2%) have stronger Statewide EV policies to encourage uptake than Mississippi (240.9%) where EV adoption is growing fastest in the second hand market, so this interpretation is inconclusive.

Research conducted by New AutoMotive has found that almost one in ten (8%) newly registered vans in the UK last month were electric, double the amount of registrations for June 2021. 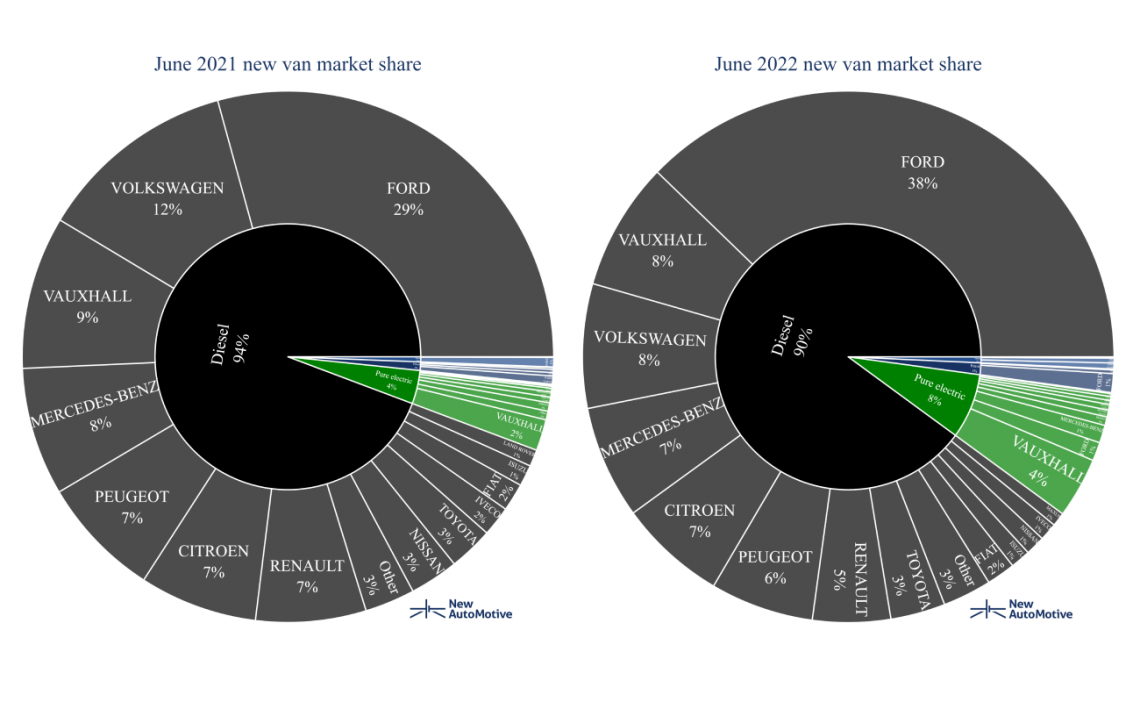 New AutoMotive’s Electric Van Count (EVC) monitors the percentage share of newly registered vehicles in the UK that have either petrol, diesel, hybrid or electric drivetrains.

As exemplified by the inner circle of the pie charts above, diesel continues to dominate the market with 90% of the new van market share last month, which should continue to decrease as the UK makes progress towards its electric vehicle infrastructure strategy commitments. 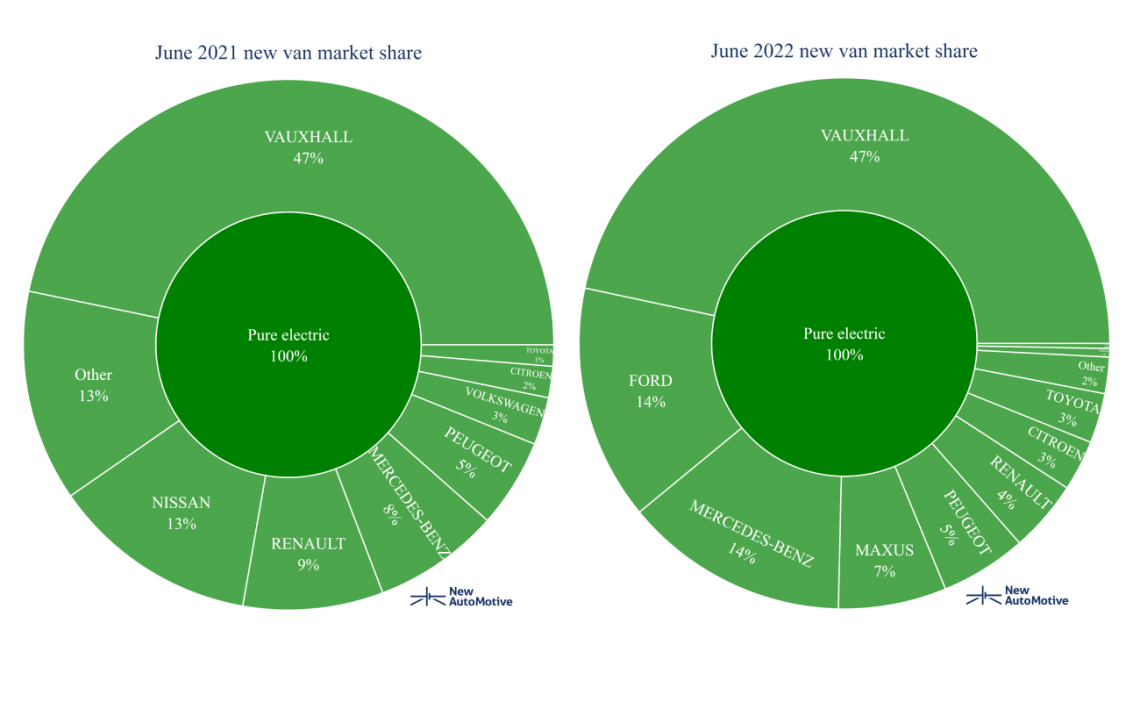 Their analysis found that Vauxhall was the manufacturer with the most electric van registrations (47%) for June of 2022 and June of last year.

Electric vans manufactured by Vauxhall have been popular this year – they have had the highest percentage share of newly registered electric vans five out of the last six recorded months, with February being the only anomaly.

Bloomberg reported that 5% of all new car sales in the US have a fully electric drivetrain. Past trends suggest that this is a critical tipping point for EV adoption, as the 5% threshold typically signals the start of mainstream demand and consequent mass adoption following a period of steady growth in the ‘early adopter-phase’.

This trend has been seen in 18 other countries, with the majority located in Europe. In Norway, Austria and Germany, rapidly accelerating demand ensued once the 5% tipping point was met. The next major car markets approaching the tipping point this year include Canada, Australia, and Spain. 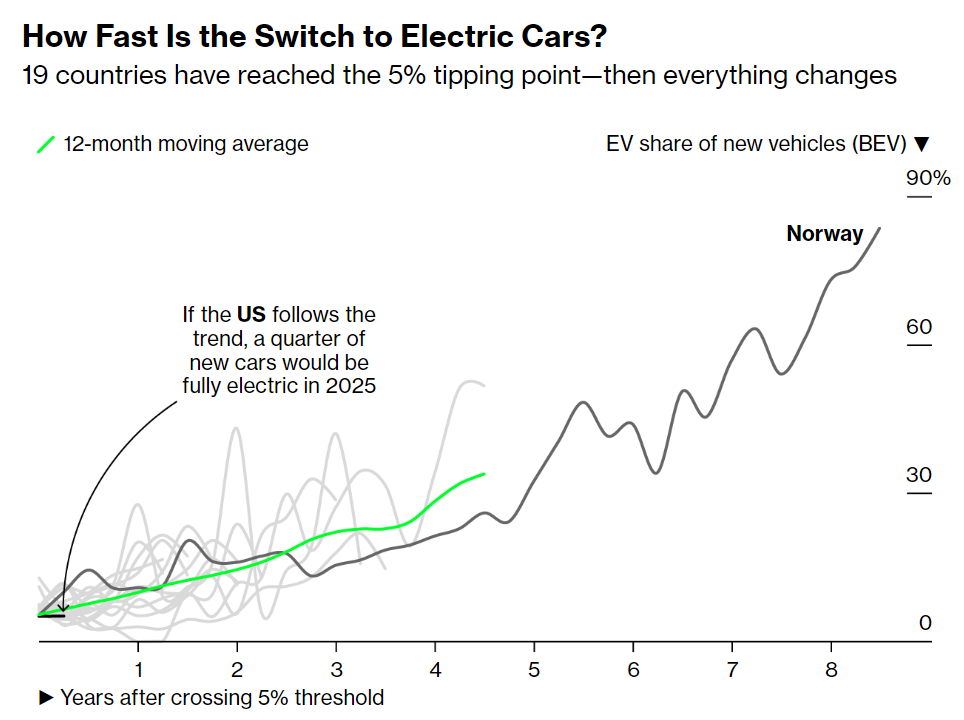 Forecasts have predicted that should the US follow the trend established by the other 18 countries, a quarter of new car sales could be electric by the end of 2025. This would signify progress, and suggest that the US is making progress in order to meet the Biden administration’s executive order aimed at making half of the cars sold in the US zero-emission vehicles by 2030. 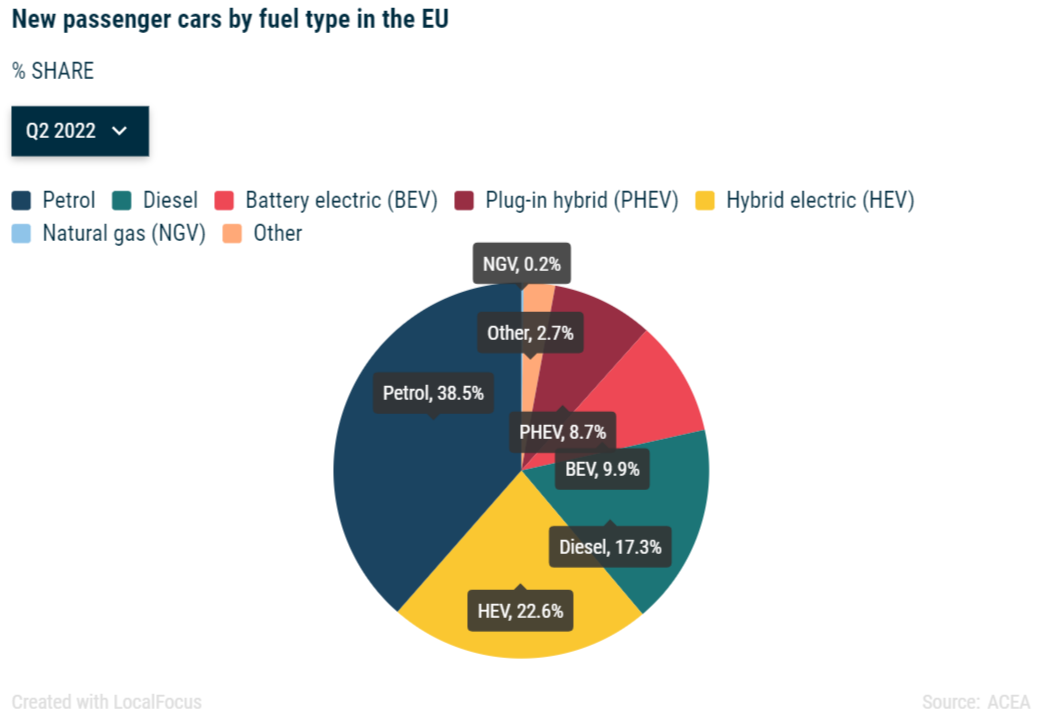 Pie Chart by the ACEA

Data published by the ACEA has disclosed the percentage share of newly registered vehicles in the EU by fuel type for the second quarter of 2022. Sales of battery powered electric vehicles continue to grow, and accounted for 9.9% of total car passenger registrations. Plug-in hybrid vehicles also expanded their market share (8.7%) by 0.3% in comparison to the previous quarter. 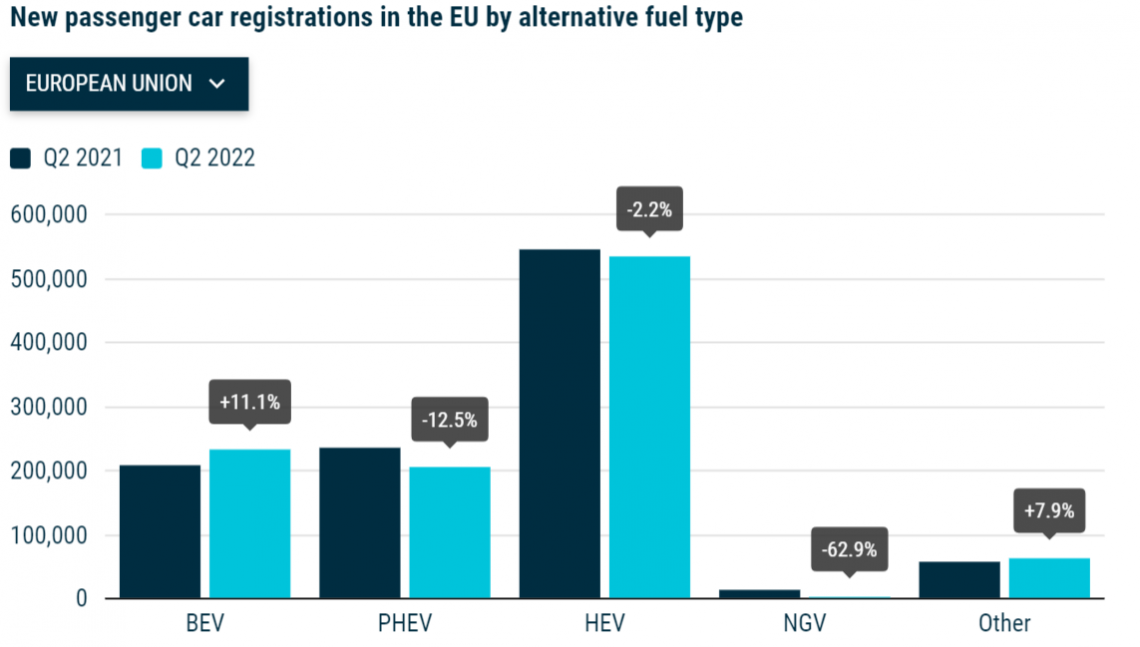 Graph by the ACEA

These gains in percentage share came at the expense of petrol and diesel-powered drivetrains, as their market share contracted. Both petrol and diesel-powered drivetrains account for 55.8% of the total market share, with petrol at 38.5% and diesel 17.3%. Their dominance in the market has also decreased by 6.2% when compared to Q2 of 2021. This can be attributed to a fall in sales and demand – petrol sales decreased by 22.2% across the EU, whilst diesel saw an even steeper fall by 27.7%. Evidence that the EU’s decarbonisation policies are having an effect.