As a foreword to our first alternative drivetrain news roundup of the year, we wish everyone a happy new year – we hope that it is a fruitful one for all.

Our Electric Vehicle & Alternative Drivetrain newsletter will continue in the same format of old, but with a much more deeper focus on news about commercial vehicles and companies linked to the logistics, delivery and distribution industries.

This will be supplemented by our usual analysis on EV adoption rates both at home and abroad, as we continue to monitor the progress of the industry and the environment as a whole for further context.

Following a review of the EV market for 2022, PepsiCo, Coca-Cola, IKEA, Nestlé and iconic yellow school buses feature in this edition, as the month of December provided a collection of very interesting headlines outside of Elon Musk’s Twitter antics.

2022 was a tumultuous year for the UK economy, as the pressures of inflation and the cost-of-living-crisis began to be felt by businesses and consumers alike.

Despite the poor economic climate, the adoption rate of electric vehicles (EVs) continued to grow in the UK, and this trend extended worldwide too, with global sales of EVs also continuing on an upward trajectory, with an estimated 10 million electric cars registered throughout the year. A 3.5 million increase on top of record set (6.5 million EVs registered) in 2021.

An impressive 250,407 battery electric cars (BEVs) were registered in 2022, compared to 181,062 registrations in 2021, making it the fastest growing segment of the automotive market. This is at the expense of petrol or diesel-powered vehicles too, whose authority continues to fall as EV adoption accelerates.

It will be interesting to see how the EV adoption rate fair as the true extent of the current financial situation comes to pass. As high interest rates affect the financing of electric vehicles and consumer spending continues to tighten, both could compound to contract the EV market and subsequent adoption.

On the other hand EVs, which have notoriously high price points currently, may see a slight decrease in price throughout 2023 as demand drops and competition in the space becomes more prevalent. The softening of prices should be more applicable to the second-hand EV market, which continues to mature and see record sales year-on-year.

Deloitte’s 2023 Global Automotive Consumer Study found that cost concerns will continue to be a key barrier to electric vehicle adoption throughout the year. Those surveyed were asked to air their greatest concerns when buying an electric vehicle, with just over half (52%) of U.S. respondents citing cost as their number one concern, followed by driving range (48%) and charging time (47%).

One constant for the foreseeable future will be government schemes and tax incentives to reduce the broadly high price points of EVs, and they will continue to play a pivotal role in their adoption throughout 2023. The IRS released a 2023 list of vehicles that qualify for the new $7,500 tax incentive as of January 1st, while in the UK electric vehicles still qualify for zero road tax until 2025.

Coca-Cola vs PepsiCo: The Race Towards Sustainable Delivery

The battle between the food and beverage behemoths to decarbonise their fleets intensifies.

Given that over 6% of the world’s greenhouse gases are created by trucking, the road freight sector is under increasing pressure to reduce its carbon footprint, and it is an area in which corporations such as Coca-Cola and PepsiCo are increasingly aiming to decarbonise.

To that end Coca-Cola Europacific Partners (CCEP) concluded a €7 million deal with Renault Trucks to establish one of the largest EV delivery fleets in Belgium, and received the first batch of their 30 truck order last December.

Renault Trucks estimates that the deal will reduce CCEP’s CO2 emissions by 75% in comparison to an equivalent fleet of diesel-powered trucks.

VP and Country Director of Coca-Cola Europacific Partners for Belgium and Luxembourg, An Vermeulen, highlighted the importance of CCEP having a long-term, sustainable approach to delivering their products:

“Investing in electric trucks will allow CCEP to cut CO2 emissions by 30% across the entire value chain by 2030 and become climate neutral by 2040.”

Coca-Cola competitor PepsiCo has conducted similar plans to decarbonise their US fleet, but through the implementation of 100 heavy-duty Tesla Semis by the end of 2023.

PepsiCo will use Tesla’s flagship eco-friendly trucks to deliver to major retailers such as Walmart and Kroger.

So far PepsiCo have received 36 Tesla Semis which have been deployed in Sacramento (21) and Modesto (15).

The deal with Tesla represents the first high-profile commercial deal for the Tesla Semi, with PepsiCo buying the vehicles outright having secured a $15.4 million state grant in tandem with a $40,000 federal subsidy per vehicle.

“It’s a great starting point to electrify. Like any early technology, the incentives help us build out the program.”  – PepsiCo Vice President Mike O’Connell.

Following the success of a trial to test solar-powered cargo bikes for delivering products to customers in Delft, The Netherlands, furniture retailer IKEA have decided to make the vehicle readily available to its stores worldwide. The inclusion of the eco-friendly bike adds a ‘more sustainable, accessible and cost-effective’ mode of transportation to their fleet that is convenient in crowded urban areas with heavy traffic congestion or locations with limited access to transportation.

“This Sunrider bike can accommodate roughly 90% of the IKEA product range and emits 98 per cent less CO2 than modern diesel vans. For IKEA, it’s important to explore new ways to improve the service offer for the customers, both from a more sustainable, affordable and accessible perspective. The solar-powered cargo bike does all that.” – Helene Davidsson, Sustainability Manager, IKEA. 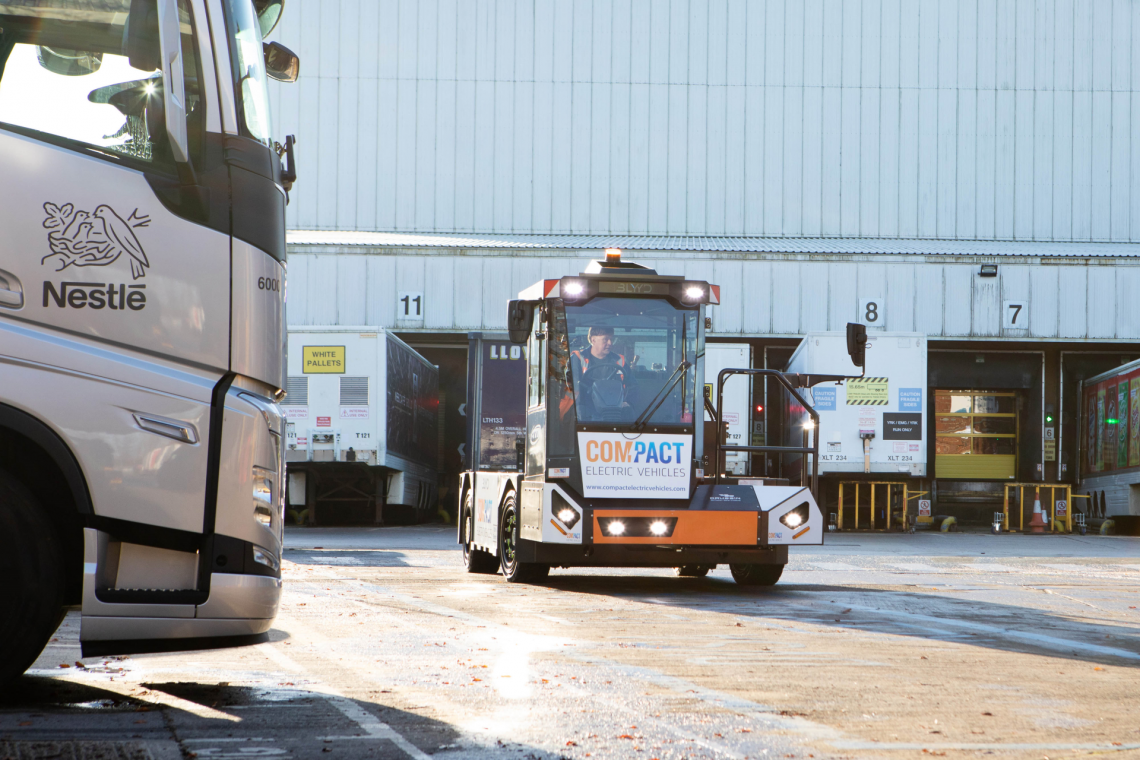 Nestlé UK & Ireland have started to trial an electric shunter (the ‘Gaussin Electric Shunter’) on its York Campus, with a view to replacing their current diesel-powered shunters. The trial will be the second of its kind having successfully implemented their first electric shunter at the Cereals site in Bromborough.

The vehicle has battery-swap functionality and on-the-go charging to ensure it is available on-demand across the campus, ready to move raw materials, packaging and finished goods.

“It’s an excellent opportunity to explore the use of electric vehicles on Nestlé’s York campus and has an important part to play in our Sustainability Roadmap and our journey towards net zero.” Joe Hurst, Transport Project Specialist at Nestlé UK & Ireland.

Earlier last year Nestlé announced that they had successfully switched 75% of its trucks from diesel fuel to Bio-LNG, a renewable biofuel made by processing organic waste flows, such as industrial waste, manure, and sewage sludge.

Getting the bus to school forms the bedrock of a lot of childhoods – around 20 million children in the US travel to school every morning – equating to billions of miles a year and a significant amount of air pollution.

Research shows that the toxins released by diesel-operated vehicles can have an adverse effect on a child’s respiratory system, which can culminate in illnesses such as asthma and chronic bronchitis.

School buses therefore require urgent decarbonisation, particularly on the basis of the damage it is doing to children as much as the environment.

To address these issues several companies have specialised in manufacturing zero-emission school buses to create a safe, but nonetheless practical environment for children to travel in, such as The Lion Electric Co. and Highland Electric Fleets.

The Lion Electric Co EV school bus for example can carry up to 72 passengers up to 155 miles per charge.

The programme offers school districts up to $375,000 to replace traditional diesel engine school buses with their electric counterparts, which have an average cost of around $400,000.

A percentage of the cost will also be saved through the disparity in price between the cost of charging a school bus and a full tank of diesel fuel.

What is a shunter?

A shunter is a small locomotive that is typically responsible for the movement of goods or vehicles on construction sites.