What do transportation operators really think about the UK’s progression towards net zero emissions by 2050?

Home   /   Blog   /   What do transportation operators really think about the UK’s progression towards net zero emissions by 2050?

A collection of 190 countries worldwide, including the UK, have pledged to reach net zero emissions by 2050 in a bid to tackle the escalating climate crisis.

The UK government has ambitious aims to meet this pledge via their Net Zero Strategy initiative – a collection of policies and proposals that are designed to decarbonise all sectors of the UK economy.

These policies include bans on the sale of new petrol and diesel vans from 2030, and fossil fuel HGVs by 2040, which have been enshrined in law.

The scale and scope of transitioning to a carbon neutral country within this timeframe is a seismic task that requires all areas of the economy to play pivotal roles.

Particularly within the transportation industry, which is currently the biggest contributor to greenhouse gas emissions in the UK.

Transportation accounts for more than 30% the UK’s total carbon footprint, with road vehicles accounting for around 19%.

This sector is therefore at the forefront of policy changes and initiatives to reduce the momentous impact it has on the environment, and pave the way for the UK to meet their net zero pledge by 2050.

A recent study conducted by Webfleet and Bridgestone, in association with research consultancy OnePoll, has enabled 300 UK fleet decision makers (150 responsible for van fleets and 150 responsible for HGV fleets) to voice their opinion on how they feel the UK government is currently performing on key sustainability issues.

This allows one to gauge to what extent the UK government’s greenprint scheme currently meets the ambitions and expectations of fleet operators.

It also provides insight into the logic and motivations behind their thought processes. This is valuable to

“improving our understanding of the industry’s attitudes, ambitions, motivations and concerns, (so) we are better able to collaborate to achieve our existential goal of tackling climate change.” – Andrea Manenti, Vice President North Region, Bridgestone EMIA

Is the government doing enough to meet its net zero emissions target?

“A £950 million rapid charging fund has been created to support the rollout of at least 6,000 high powered charge points and 300,000 public chargers at a minimum across the UK by 2035.”

The general consensus from the respondents is that the UK can meet its net zero target.

But more must be done by the government to instil confidence in its progression, and ensure that it delivers on its pledges.

The percentage figures detailed in the report represent those survey respondents who gave a definitive yes/no or agree/disagree answer.

The sentiment seems to be of confidence in the government and their ability to meet their environmental targets, as reflected by the 58% who feel assured that the UK will meet its net zero pledge.

But there is also an air of pessimistic caution among 32% of the respondents.

This pessimism primarily stems from the belief that the government isn’t investing enough money into initiatives and infrastructure to ensure they deliver on their net zero pledge.

62% of the decision makers believe that more money needs to be invested if its sustainability targets are to be met, suggesting that they feel the government is being conservative in its approach.

In a similar vein, three out of five of the respondents (60%) believe that the government should provide greater financial support and guidance to businesses in order to accelerate the drive towards net zero.

This is the first of numerous scepticisms that the decision makers expressed in the government’s ability to deliver on its landmark climate objectives.

Another motivating factor for this scepticism, and a stumbling block for businesses to progress frictionlessly towards carbon neutrality, is accessibility.

47% of fleet decision makers believe that the lack of specialist EVs for different businesses is the number one barrier to EV adoption.

Closely followed by a lack of rapid charging infrastructure (41%).

As of May 2022, there are over 24,000 electric vans in the UK while the number of licensed EV HGVs and LGVs is significantly lower.

The number of licensed ultra-low emission HGVs in the UK for Q4 2021 was a measly 507 units.

Hence, UK Transport Minister Trudy Harrison revealed in May that over £200 million of government funding will be injected into an extensive zero emission road freight demonstrator programme to create the ‘world’s largest fleet of zero emission heavy goods vehicles’.

The UK also boasts one of the largest rapid charging networks in Europe – and there are more rapid chargers for every 100 miles of key strategic road than in any other country in Europe.

A £950 million rapid charging fund has been created to support the rollout of at least 6,000 high powered charge points and 300,000 public chargers at a minimum across the UK by 2035. 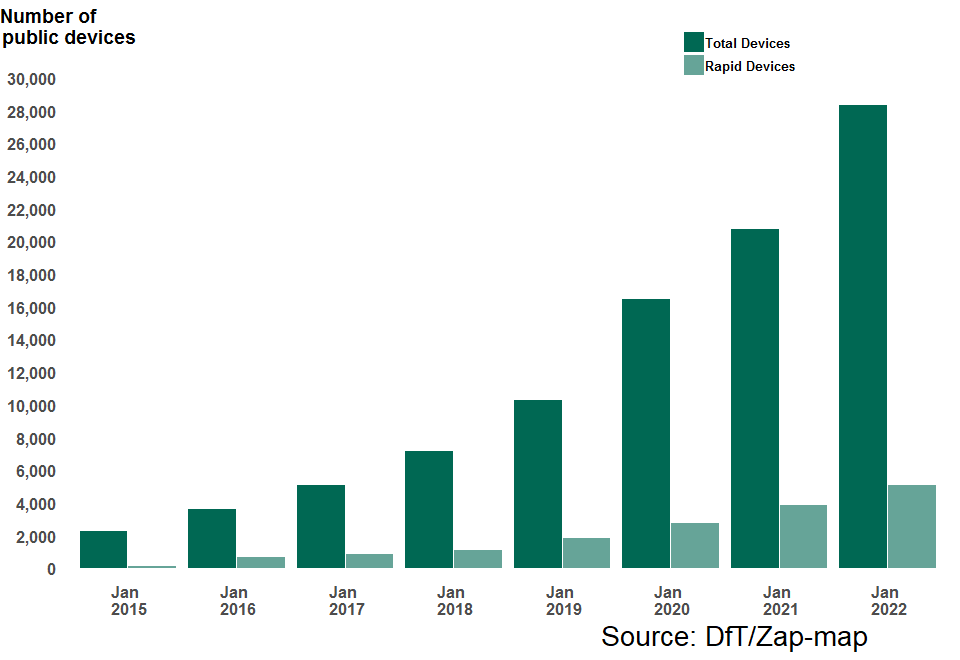 Much progress needs to be made to reach their 300,000 public charging target, however.

Their goal is to ensure these charge points are installed ahead of demand, inspiring confidence in drivers who have not yet made the switch.

As demand for electric cars increases, their uptake is still low in comparison to traditional drive trains, with the main impediment to more people buying EVs being their high price point.

Despite their increasing popularity, electric cars only accounted for around 11.6% of all new cars sold in the UK in 2021.

Evidently more needs to be done to convince fleet decision makers that they can meet their demands.

What are the main motivators for going green?

Interestingly, the study has looked at the motives behind fleet decision makers opting for a sustainable approach to their operations.

61% want to decarbonise in order to protect their health, and that of their family and the next generation.

The same number said that going green would support their career progression.

While more than half (57%) said they wanted to help save the planet.

Tackling the climate crisis is a collaborative effort which requires all stakeholders in the transportation ecosystem to play an active role – from the government to local councils and businesses.

Commercial businesses, which contribute to around 18% of the UK’s total carbon emissions, must do their bit to abide by green laws and responsibilities that the government imposes on them.

The study references competing business interests as a hindrance to decarbonisation.

Decarbonisation is not just a fleet manager’s responsibility.

Different company departments – from fleet, finance and HR to operations, sales and marketing – can have competing business priorities and interests.

More than half of fleets (56%) believe this is acting as an impediment to their decarbonisation agenda.

The impetus is then with senior decision makers within the organisation, particularly at board and executive level, to implement a collaborative ‘green first’ culture.

And decision makers realise this.

60% cited the need for a cultural shift within their company for decarbonisation to be embraced by all business stakeholders.

The government can legislate to accelerate the UK’s progression towards net zero, but to ensure this becomes a reality businesses must also reflect internally (i.e by measuring their carbon footprint) on the impact their operations are having on the environment, and mitigate accordingly.

This was prevalent (73%) among the surveyed decision makers, who said that they did measure their carbon footprint.

Although almost half (45%) of those surveyed do not use technology to calculate their fleet’s carbon footprint, instead choosing to manually work out an estimated figure.

Without utilising automated reporting through technology, fleets cannot utilise pinpoint data that accurately highlights the areas where changes should be made in order to reduce emissions.

Want to find out how Stream can help you reduce your fleet’s carbon footprint?